When I was diagnosed as autistic a couple of years ago I started following a few autism charities and support pages on Facebook.  I find they often post some interesting articles, help me to understand my autism better and help me to explain to others what it can be like being me as an autistic person.  However there are times I get frustrated at some of the posts from these pages.

‘Top Ten Positive Autistic Traits’, ‘Terrific Traits of Autistic People’, ‘Positively Autistic’, Google positive autism and this is the kind of blog and Facebook post titles that come up.  These kinds of posts appear in my Facebook news feed from time to time and always manage to annoy me.  Sure, autism has some positive traits, but these are outweighed by the negative ones.  The fact that we even have autism charities tells you it is not such a great thing to have or we would not need the support.   A lot of the traits typically said to be positive, I have actually found to be negative in my life.

How am I supposed to be positive about my autism when I am called rude, selfish or an annoying know it all fairly regularly?  When you manage to annoy other people on such a regular basis without meaning to it can make you feel less than positive about it.

Some of the worst posts are those phrases you are supposed to share on your Facebook wall such as ‘My child has autism, what’s your kid’s super power?’ or ‘I bless all autistic children’.  Almost all of the phrases are about autistic children, it is as if once you are adult you are suddenly no longer autistic or it at least no longer matters.  A lot of the phrases make out how great it is to have autism and some almost make out we should celebrate it.  While it is not a tragedy, it is not something I am going to have a party for and get really excited to have. 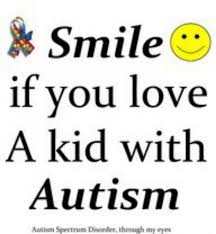 It would appear from some posts that I am not an individual, but some kind of clone.  It may seem petty, but the use of language matters when writing autism posts.  Too often posts are written using pronouns such as them, they, and all.  It makes it sound like all autistic people are exactly the same and that we have no individual personalities.  Often the worst examples of this can be found more in the comment sections of autism posts.  This gets annoying when you find out some of these people who comment are support workers, teachers or parents of autistic people who should know better.  ‘They are all so well meaning’ or ‘they are all so wonderful’, makes us all sound like we are too stupid to know any better, and that every time we say something less than helpful or nice we actually do not mean it that way.  Yes there are times I say the wrong thing and appear selfish or rude when I do not mean to, but there are times I am less than well meaning.  It makes it sound as though we can never do any intentional harm.  I do not like to think of myself as a nasty person, but I admit to times I have said or done things that make me less than wonderful, and I knew I was doing it.  Not all autistics are wonderful, loving or nice, nor are they all horrible, rude and annoying.  Autistic people have personalities that also affect behavior and attitudes, just like everyone else.  Some days I am in a bad mood and not so great to be around.  Sometimes this is my autism, sometimes it is just me having been really annoyed by something or someone, my hormones or lack of sleep.  I am not an all, they or them, I am me.

I think more posts on these pages should be written by autistic people themselves.  They can give hints and tips they have found useful to other autistic people and tell parents and those who work with autistic people what it can really be like for some of us who actually have it.  One of the best support groups on Facebook I have found is The Girl With the Curly Hair.  She is autistic and writes very well about what it can be like to have autism.  It is refreshing as an autistic female myself to have another autistic female who can communicate well instead of the usual male bad at communication stereotype.  Plus the comments on her posts tend to be from people who seem to understand what being autistic can really be like.

Try not to share those autism phrases that mean well, but actually can come across as slightly patronising a lot of the time.  If you should choose to comment on an autism post remember not to lump all autistic people in as one mass.  That aside there are some really good posts about autism out there and they can aid understanding, but try to remember not every post will apply to every autistic person, autistic people are individuals.

Religion is fascinating; in school it was one of my favourite subjects.  I tried the going to church thing and having faith, but it never worked for me.  I respect other people’s right to religion and have no problem with them having faith, but they should in turn respect my right to not be religious.

I have come across a few religious people who seem to assume other people are also religious without even asking them.  As a disabled person I have had others say they will pray for me more than once.  They seem to think I should be grateful for this, while I Know they mean well please do not expect me to thank you for it.  I am not religious therefore have no belief in the power of prayer.  Even the Archbishop of Canterbury Justin Welby and his disabled daughters are not keen on Christians who say they will pray for you.  Kathrine Welby who has mental health issues said in a recent interview ‘I think with mental health, as with any disability, if your first response is, ‘Can I pray for your healing?’ then you’re not listening. Because actually: A, you don’t need to say to someone you’re praying for their healing for God to be able to work; God’s bigger than that; and B, it really shuts down the conversation,’ (www.christiantoday.com).  I agree that it does shut down a conversation; it can be like saying I will pray for you as I actually do not want to have to listen to what really wrong with you and help you in a practical way, even if that is not what they mean by it, that is how it can come across sometimes.  If they say they will pray for you and offer practical support then that is far better.

Some religious people believe the power of prayer will heal the disabled and sick.  Telling a disabled person God will cure them if they have enough faith and pray hard enough is wrong.  It is cruel to those who do have faith; it could make them feel as if God no longer loves them and has abandoned them when they are not cured.  It could also lead to them doubting their faith, which may not help their mental health.

Then there are places like Lourdes which claim to cure people by taking the waters, by either bathing in it or drinking it.  While I think they are in themselves not that bad, a lot of people visit just as curious tourists and not for any kind of cure, it is a fine line between that and exploiting the vulnerable.  I am sure some genuinely believe the water can cure, but we have to be careful what we tell vulnerable people.

Another thing I dislike is when being disabled makes me seen as an easy target for religious people to indoctrinate me into their faith.  It does not happen often to me, but when it does I hate it.  No I will not unquestioningly follow what you tell me.  In fact I think one of the reasons when I went to church and tried having faith it did not work for me was being autistic I over think things and think too logically.  I thought about what was being said in church and probably took what they said far too literally.  For me religion made no logical sense.   I think rather than making me easier to convert my condition made it harder.

I run a Facebook page connected with my hip issue.  I once had someone on the page talking about how God cured them as a child when someone brought in a sacred object to the hospital and passed it around for all the children on the ward to touch.  It was a piece of cloth, supposedly worn by a saint.  Whether or not it was a genuine relic, I had to explain that the hip does often grow back to normal and correct itself for some people who have the disease very young.  It did not matter the medical facts, she swore blind it passed the healing power of God onto her.  What worried me was how someone was allowed onto a children’s hospital ward, claiming to cure vulnerable people in that way.  I looked up the famous cloth online, if anything it was likely to do more harm than good, it was a filthy rag.

In some cases I think religion may help someone with an illness or disability in so much as attitude and ‘mind over matter’ giving them faith in themselves.  Praying may aid some people’s recovery giving them the boast they need.  It is the claim it cures anything that is wrong, it should be seen as more of an aid alongside other treatments.

I sometimes wish I did have a religious faith as it could make the really low points less awful and help, but I tried and it just did not work for me.  I will always stand up for others right to religion and for religious tolerance, but I will not stand up for people who take advantage of vulnerable people or insist that I must be religious also.

Recently online someone who is religious told me there is a difference between believing in a god and blindly following a religion to the point you do more harm than good.  This is exactly my point.

Rebelling against a culture that values assimilation over individuality.

"Truth Never Damages A Cause That is Just"--Ghandi

The Elephant in the Room

Writing about my experiences with: depression, anxiety, OCD and Aspergers

The world of accessible toilets

Breaking down stereotypes about physical difficulties

Tripility is a user driven travel resource, giving disabled people, those with dietary requirements or families of children the informed choice for their trip.

Learning to live my life with anxiety, depression, and self-harm (and other things).

The Art and Craft of Blogging

The latest news on WordPress.com and the WordPress community.